“Nicholas Gray’s book explores some of the earliest yachtsmen to sail solo round the Horn, impelled solely by their determination. his accounts of Al Hansen, Vito Dumas, Marcel Bardiaux, Bill Nance and Edward Allcard are gripping, and his original research makes this an important book….  YACHTING MONTHLY, November 2018 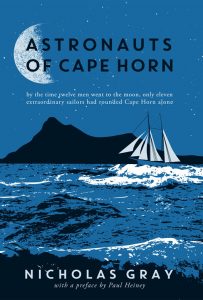 Review from the Autumn Edition of the MARINE QUARTERLY, edited by Sam Llewellyn

“Nicholas Gray is an indefatigable chronicler of nautical tribulation. His last book, Last Voyages (Fernhurst Books) did what it said on the tin, and in some style. His new book is Astronauts of Cape Horn (The Conrad Press). The title is odd but understandable, given the fact that by the time twelve men had gone to the moon, only eleven sailors had rounded Cape Horn alone.  It is a lively read, but not necessarily one to give to someone you are trying to encourage to take up sailing, as it fair to say that some of the sailors involved did not have an absolutely splendid time. Vito Dumas strikes a sort of mid-point  for discomfort and stress. Alfon Hansen, who did not survive, is a low point, and the Roses, Chichesters, Allcards and Knox-Johnstons, while evidently regarding the rounding of this most lethal of capes as no picnic, strike a competent and practical note.

Nicholas Gray is a writer who understands the extremes of human endurance, and the way they can tip the human mind into something approaching madness. His narrative of an early circumnavigation by the Argentinian Vito Dumas is enough to make many swear never to go out of sight of land, but is a riveting read from the first word to the last”.

“Astronauts of Cape Horn owes its unusual title to the fact that by the time of the sixth and last moon landing in 1972, twelve men had stood on that alien surface but only eleven had doubled Cape Horn singlehanded. Some of the latter are well-known, at least to fellow sailors, but others are now almost forgotten. Nicholas Gray, himself a very experienced singlehanded sailor, has done much to rectify this between the covers of this fascinating book.

The first recorded rounding of Cape Horn – as against passage through the Magellan Strait – was in 1615, and it was almost another 200 years before land was discovered to the south. Prior to the opening of the Panama Canal in 1914 it became the graveyard of countless fully-crewed ships and men. As (almost) every cruiser knows, the first man to circumnavigate singlehanded was Joshua Slocum, who left Boston in 1895  aboard the Spray, but like most smaller vessels of the time he passed through the Magellan Strait. He was followed by Harry Pigeon, Alain Gerbault, Edward Miles and Louis Bernicot in the 1920s and ‘30s.

A prodigious amount of reading and research – allied to at least one stroke of sheer luck – went into the writing of this book. This (fairly well-read) reviewer had never heard of Alfon Hansen, who left Norway in 1932 aboard his 36ft Colin Archer-designed gaff cutter Mary  Jane. Amazingly, received wisdom at the time was that the best season in which to double the Horn was June or July, the depths of the southern winter. Accordingly, Hansen left Buenos Aires in June 1934. He later called in at a town more than 1000 miles up the Chilean coast, but after leaving to continue north was never seen again. Meeting Hansen in Buenos Aires early in 1934 may well have inspired Argentinean Vito Dumas, who in 1942 left his homeland aboard his 31ft Legh II to head eastabout, finally doubling the Horn in June 1943 as related in his Alone Through the Roaring Forties.

Next to set off was Frenchman Marcel Bardiaux in his home-built Les 4 Vents, variously reported as either 25ft or 30ft (LWL, LOD or LOA?) who left France in October 1950 and reached Cape Horn in May 1952, only to hit a (small) iceberg which forced him to return to Ushuaia for repairs – via the Beagle Channel as he had already passed Cape Horn. He finally entered the Pacific via the Magellan Strait – almost certainly the first non-naval vessel to pass through all three passages in a single season.

Fourth to head for the Horn alone was Australian Bill Nance, who left the UK aged 23 in December 1961 aboard Cardinal Vertue (a sistership of Humphrey Barton’s Vertue XXXV). Unlike Dumas and Bardiaux he never wrote about his voyage, and Nicholas Gray only learned the details due to the stroke of luck referred to previously – a chance contact with Pam Wall, OCC Port Officer for Fort Lauderdale, Florida whose late husband Andy had doubled the Horn with Nance’s brother Bob (see Flying Fish 2014/2) and who had kept in contact with Bill. Like Dumas, Nance headed eastabout via the Cape of Good Hope and the southern Indian Ocean, the last 2000 miles to Australia under jury rig. After two years in New Zealand on 1st December 1964 he set off across the Southern Ocean towards Cape Horn, which he rounded on the 7th January. Astronauts of Cape Horn is worth buying for this chapter alone.

The chain continued, with Edward Allcard doubling the Horn in 1966 after a chance meeting with Bill Nance in Buenos Aires. His 36ft yawl Sea Wanderer was 55 years old by then but appears to have coped admirably, a voyage recounted in Solo Around Cape Horn, published shortly before Allcard’s death last year and reviewed in  Flying Fish 2017/1.

Compared to their predecessors, the encounters of Sir Francis Chichester, Sir Alec Rose and Sir Robin Knox-Johnston with Cape Horn in 1967, 1968 and 1969 are well-documented on film as well as in print. Very different characters sailing very different boats, all three wrote about their circumnavigations, in Gipsy Moth Circles the World, My Lively Lady and A World of My Own, all of which make interesting reading. All three yachts are still sailing.

Frenchman Bernard Moitessier, like Sir Robin a competitor in the 1968 Golden Globe Race, passed south of the Horn in his 38ft Joshua in February 1969, but remained in the Southern Ocean past the Cape of Good Hope and eventually made landfall in Tahiti. Also in the Golden Globe Race was Nigel Tetley sailing the Piver-designed trimaran Victress, the first multihull to double the Horn. After surviving the Southern Ocean and passing Cape Horn safely a month after Moitessier, and with more than 20,000 miles already under her heels, she began to break up within 1500 miles of home and had to be abandoned – a sad and needless outcome which Nicholas Gray describes with great sympathy.

The final man to double the Horn prior to the sixth and last moon landing on 7th December 1972 was Sir Chay Blyth aboard the 57ft British Steel. Unlike his five world-girdling predecessors he opted to head westwards into the prevailing winds. Leaving the UK in 1970 he rounded the Horn on Christmas Eve, beat into the Roaring Forties for a further five months to round the Cape of Good Hope in May 1971, and finally made landfall in the Solent to a hero’s welcome on 12th August after 292 days at sea.

Since then there have been many solo circumnavigations in ever-decreasing times, but nearly all with the underlying knowledge that, should the worst happen, the authorities can be alerted and help summoned. Up to the 1970s, all who crossed oceans in small boats were as isolated as if they had been walking on the moon – in many ways more so.